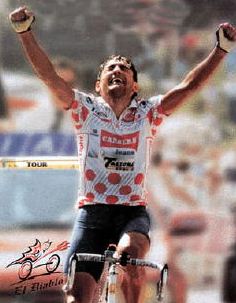 To spice it up and get a fresh view on this year's Tour de France, here comes an interview the former Italian super climber Claudio Chiappucci who won the polka-dot jersey in both 1991 and 1992 and finish on the final podium in Paris in '91, '92 & '93.

Claudio, we are now half way through the Tour. Who has surprised you the most. Both positively and negatively?
Gilbert is sparking, he’s been like that since the beginning of the season! Very positive, Cunego as well. The others are more or less as we expected them to be. The two Schleck brothers are equally strong but Contador hasn’t lost the Tour yet.

Do you think he [Contador] is still capable of winning the Tour being 3-4 mins down already?
I think he can recover, but he has to find a way to attack his rivals. The problem is that there aren't that many occasions left to do so. I think Voeckler can keep the yellow jersey for one more week, he has a very good team.
Cadel Evans has turned out to be strongest of the favorites in the first half of the race. Do you think he can keep up like that?
Well, I think he has improved a lot. He is strong and he has been at the front of the peloton all the time. He is good on the climbs and in the time trials and I think he deserves to be on the podium based on his performances so far.
Basso won the Giro last year, Nibali the Vuelta and now both Cunego and Basso are up there with the best in the mountains. How high do you see the chances for an Italian rider on the final podium in Paris?
I think Basso could end up on the podium, but he won’t win the Tour. Both  Evans and Contador have a strong time trial where they can take time on Basso, and then we have the Schleck brothers who can attack him from left and right in the mountains. It won’t be easy.
On Luz Ardiden the biggest surprise – except for Contador losing time – was probably Damiano Cunego staying with favorites. What do you think he can this year?
Cunego is not a top rider for the three week stage races anymore. On Luz Ardiden he did well but it will be hard for him to get close to the podium. Especially because of the time trial. He should target a stage win instead.
Leopard-Trek showed amazing team-strength on Thurday’s stage to Luz Ardiden, but in the end only Fränk Schleck gained a few seconds on the other favorites. What do you think about their tactic?
They made a great effort and got the group down to only the best ones, but I think they need to pick a team leader. They need to sacrifice one for the other, Fränk never said he was the ‘gregario’.
What about ‘your’ jersey, the polka-dot, who do you think will take it this year?
Samuel Sanchez can win it, I would go for him. Among the others I don’t see a true climber. No one is attacking anymore. You have to attack in order to win this jersey. Maybe the riders nowadays have different targets and don’t want to risk everything on the jersey. It’s a shame…
Last one. It seems like the Italian people (sponsors and tifosi) are waiting for a new fall of champions to fall in love with. Like with you guys in the Giro and the Tour. You arrived after a crisis in Italian cycling and managed to give a great Renaissance. How do you see the future of the Italian cycling right now?
It was different time. When I was a rider I was attacking because I wanted to see what the others were capable of doing, I wanted to give them a chance to defend themselves. Indurain was very strong and attacking him wasn’t easy, but I felt that I had to try every time. You don’t see that nowadays. It’s not easy for the Italians either. The globalization brings new sponsors into the ProTour and Italy doesn’t play that big a role anymore. We only have two ProTour teams and I think it’s going to be difficult for Italy to get new big teams with Italian sponsors. It will be interesting to see what a guy like Daniel Oss and future youngsters can bring to the table. I just hope they won’t crack under the big pressure and expectations.
Interview by Alberto Celani & Mikkel Condé
Posted by Mikkel Condé at 12:06 PM