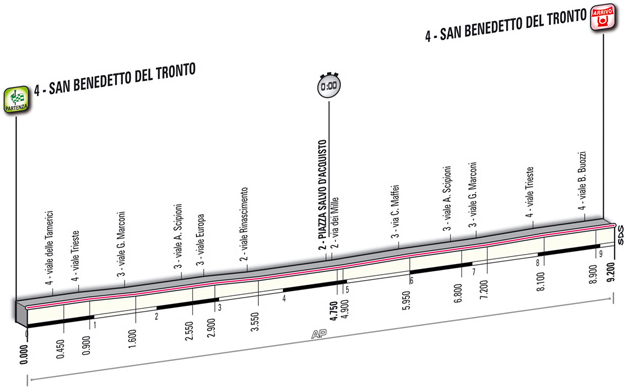 For the fourth day in a row, we will have a new rider in the blue leader’s jersey. Vincenzo Nibali attacked exactly where everybody expected him to do so, but still no one - except for Purito and Sagan - could keep up with him. Nibali now leads overall with 34 seconds down to Chris Froome and I will be very surprised if he doesn’t win Tirreno-Adriatico for the second time in a row.

This time trial is the same as last year and I doubt even Chris Froome can take back more than half a minute on Vincenzo Nibali in just 9,2 km. Nibali has been working very hard on improving his time trial skills and with a new bike and new skin suit he could even end up surprising quite a few on this stage.

Purito is after two good stages now third overall. He is 11 seconds in front of Contador and 21 seconds in front of Kwiatkowski. Once again, his chances of reaching the final podium depend on his time trial. In January, he said he had improved a lot already and now is really the time to show it. It will be more than difficult to keep Contador - and especially Kwiatkowski - behind him but personally, I hope he will manage.

Originally, I had Fabian Cancellara and Tony Martin as my two big favorites for the stage, but both put in quite an effort on stage 6. Cancellara was in the morning break and Tony Martin took a big turn for Kwiatkowski in order to close the gap. Still, other candidates like Taylor Phinney and Svein Tuft aren’t in the race anymore, so I think we’re back to where we started.

Tony Martin changed his race schedule (from Paris-Nice to Tirreno-Adriatico) in order to help his team win the opening TTT and then win this stage himself. He managed to win the first one and the chances are quite good he will to win this one too.

Tom Dumoulin and Lars Boom would have been two good jokers for this stage but since both of them were in the big break on stage 6, I’ll look to Movistar to find my jokers. Jonathan Castroviejo started out Tirreno-Adriatico with GC ambitions, but lost time in the last two stages. He is right now 14th overall but without a chance of making top10. Castroviejo is an excellent time trialist and he’s especially good on these short distances. He will be one to look out for. The same goes for his teammate Alex Dowsett. He is the British national champion and without him, Movistar probably wouldn’t have taken second place in the opening team time trial. Normally we see surprises in the final time trial in a stage race and I think Alex Dowsett could be that surprise.

For live coverage of the stage check out steephill.
Posted by Mikkel Condé at 10:27 PM