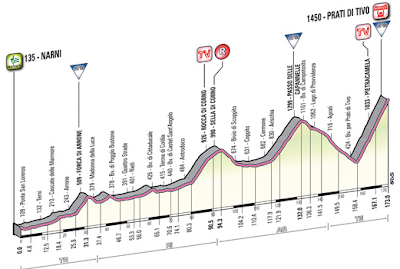 Peter Sagan won stage 3 as predicted and just like the last time Sagan won in Tirreno, the following stage will end on Prati di Tivo. Last year Peter Sagan’s teammate Vincenzo Nibali soloed away on the final kilometers, but I seriously doubt Nibali will be able to repeat that victory this year.

As I mentioned in my overall preview for Tirreno-Adriatico, this is the strongest field in many years and compared to last year, most of the favorites have at least two or three strong riders to help on the climbs. Last year only Roman Kreuziger had a teammate in the final. That rider was Paolo Tiralongo who this year is helping Nibali, while Kreuziger himself is at Alberto Contador’s service. Confused? Let’s take a look at the favorites and their teams for the stage.

Cadel Evans is the only one of the five big favorites without a strong to help in the uphill sections and as you can see Team Sky are very strong. Last season they perfected how to ride the final climbs in stages races and we just saw how they took control in Paris-Nice. Prati di Tivo doesn’t have any steep, steep sections and that is just how Team Sky like it. Froome can put his team to work from the bottom of the climb and I doubt anybody will manage to get away until the last few kilometers. Astana too have a strong team but I think Brajkovic and Kessiakoff will drop before Uran and Henao.

Looking at the favorites, Purito is the only one set to top very soon; in the Ardennes Classics. Nibali is aiming at the Giro while Contador, Froome and Evans all are set for the Tour. Purito was in the leading group on Prati di Tivo last year, but since he wasn’t supposed to peak until the Giro, he lacked a bit in the end. This year it’s different. Purito started out Tirreno-Adriatico with this mind set on winning overall. He showed in Tour of Oman that he is in excellent shape already and knowing he has to take back the time he lost in TTT, he will be eager to get the 10 bonus seconds on the line. The bonus seconds are also the reason why I don’t think a break will make it. This race will probably be determined within a few seconds and naturally all the favorites want to win this stage. The way I see, Purito is the strongest of them right now. I’m sure Contador will put in a series of furious attacks but I doubt he will be able to drop Purito and Froome for good.

My outsider this time is Bauke Mollema. Blanco have a strong team in this race and Mollema can count on support from in-shape Tom-Jelte Slagter. In the final of stage 3, when Alberto Contador was in front of the peloton Bauke Mollema was right behind him and if the other favorites don’t manage to drop Mollema on Prati di Tivo, his fast finish could even give him the stage win.

For live coverage of the stage check out steephill.
Posted by Mikkel Condé at 8:12 PM