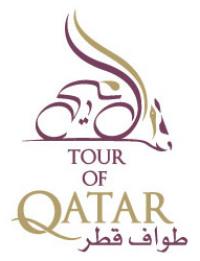 Looking at the start list you may think the Spring Classics are starting early this season. Thanks to the heavy wind and sunny weather, every rider aiming at the cobblestones classics want to be here. The hotels are the best the riders will see during the season and despite the lack of hills - or turns for that matter - Tour of Qatar now counts as an important race for all teams with high hopes in March and April.

There is no need for stage profiles as they are all pancake flat. Five stages in the heavy cross wind expected to end in a sprint plus a team time trial on the second day. Tom Boonen normally owns this race and in his absence we have to look to a couple of other of the big contenders for Paris-Roubaix later this year.

First up is Edvald Boasson Hagen. Team Sky have had a new approach to the season training very hard during the winter and we already saw what that meant when Geraint Thomas showed off in Tour Down Under. It’s not often you see a track rider drop the climbers on 20% as Thomas did in Australia. Edvald Boasson Hagen didn’t seem to hit it off Down Under, but he did put in a good effort on Willunga Hill for Thomas and managed to take third place on the finale stage. The Norwegian wonderboy aims big at the Spring Classics this season and after getting the legs ready Down Under, I think he will be the man to beat in Qatar. Team Sky have a great team for the TTT and if Eddy mingles with the best in the mass sprints as well I can’t really see who should beat him.

Only guy I can think of is Mark Cavendish.  Quickstep are always on top of their game in this race and must be one of the favorites for the TTT as well. Cavendish is not a stranger to Tour of Qatar, but he always seems to have bad luck or get caught in the wind when it counts. Quickstep have guys like Terpstra and Stybar to keep Cavendish safe, but both of those might as well give a go themselves in the challenging weather conditions. If you are looking for a joker for the overall classification, I’ll recommend Niki Terpstra.

I said we had to look for Paris-Roubaix contender to find the overall winner and I know Mark Cavendish doesn’t fit this category but the next one will. Fabian Cancellara has always been good in Qatar and with a strong team for the TTT and last year in mind, Cancellara will definitely be a marked man. Last year Tom Boonen started his amazing season by winning in Qatar and hungry for revenge Fabian Cancellara might as well do the same and show the world that he is ready for the classics. The race normally splits up many times during the six days and only a few riders know when to be in front as well as Cancellara do. Radioshack need a new beginning after Bruyneel and the best man to give them that is Swiss.

Last one of my top favorites for the overall win is Taylor Phinney. The young American has set Paris-Roubaix as his goal big goal this season and helped by a very strong team and a fast finish on the line, Phinney should be named as one of the main contenders. As many other teams, BMC are sending their Classics riders to Qatar and having Marcus Burghardt, Michael Schär and Greg Van Avermaet to help Phinney stay in front and out of troubles, I think BMC will be one of the controlling teams in this race. Phinney may not have what it takes to beat Cavendish, Guardini or Degenkolb in a sprint finish, but he is consistent and fast and says he’s coming into the race “strong and confident”.

For what concerns the sprint field this may not be as great as in Tour Down Under, but with names like Mark Cavendish, John Degenkolb, Andrea Guardini, Nacer Bouhanni and Elia Viviani on the start list, it should be five very interesting days. Mark Cavendish showed in Argentina that he is ready to win early this season when he won the first stage of Tour San Luis and I expect him to take the first stage in Qatar as well. Andre Greipel turned out to be a level - or two - above everybody else in Australia and I’m certain Cavendish is eager to show he’s up there too.

Andrea Guardini didn’t really hit it off in Tour Down Under and even though he may not be one of the best in the cross wind, he should be able to try his luck in a couple of stages. If he manages to stick to the right wheel in the final, he could be the best pick to beat Cavendish.

If not Guardini then John Degenkolb. Argos-Shimano have always aimed at getting ‘the best leadout train in the world’ and they showed last year what they are capable of with Marcel Kittel and Degenkolb. Yet it all went wrong in Tour Down Under. Not a single day did they manage to time it well so you can be sure they too are eager to get started. John Degenkolb was outstanding in the Vuelta last year and without Lotto-Belisol, Argos-Shimano could very well be the leading team in the sprints.

That is for me. As always I will leave you with my pre-top10 for the overall classification.

For stage previews, winnerpicks and jokers make sure to follow me on Twitter @mrconde
Posted by Mikkel Condé at 9:51 AM