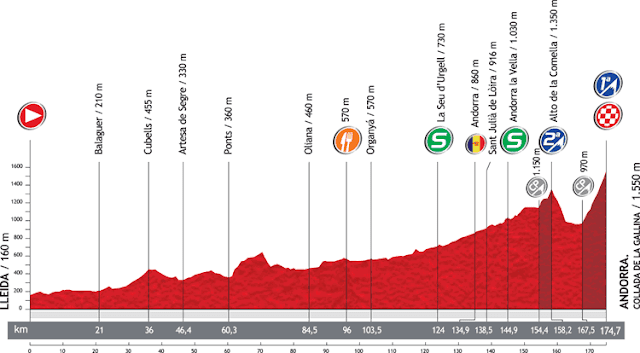 Okay. Let’s get it over with. Third time was not the charm for Swifty - it was third strike instead. I think I’ll jump on the Degenkolb wagon from now on and with that out of the way, let’s have a look at stage 8 to Andorra.

While the finish to Estación de Valdezcaray on stage 4 wasn’t really steep I can assure you that it will be to Andorra. The category1 climb Collada de la Gallina is 7,2 km with an average gradient of 8%. it’s a nasty climb with more than just few parts of 15% and compared to stage 4 you can’t hide in a big group this time. Not if you want to be in the front!

The peloton enters Andorra after 134,9 km (40 km to go from there) and that means there won’t be an easy part of road from there on and to the finish line. With 20 km to go Alto de la Comella starts. It’s a category2 climb and despite its average gradient of “just” 5,2% the last kilometer doesn’t drop below 11%. The descent from Alto de la Comella is very tricky and technical and once again you need to be in the front already in order to start Collada de la Gallina in a winning position.

My favorite for the stage is Purito. I thought he might would have let go of the Red jersey on stage 7, but there is no way he is giving away just before entering his home town the following. Purito lives very near this climb and knows it better than the most and I haven’t seen anything so far that would make me doubt his strength. I think (and hope!) that Alberto Contador will go hard and keep on attacking in order to get away, but it will be very difficult for him to drop Purito.

On Arrate Contador showed that he can drop Froome with his accelerations and this time I think Purito will help him out if they get away together. Rumor has it that Contador and Purito have never really been the best of friends but on Collada de la Gallina they could take a huge step towards the overall podium if they manage to work together.

As I said I doubt Purito will let the jersey go, so you better be way out of the overall classification before you even think about going into a breakaway. That being said I think it’s time to see guys like David Moncoutie, David de la Fuente, Amets Txurruka and Damiano Cunego make an appearance in this race. Moncoutie crashed hard in the Tour and said just before the Vuelta that he still had problems standing up attacking the climbs. He might need a few days before he’s a good pick. Still if he is ready now, he is a solid candidate for a breakaway win.

My personal joker for the stage is Damiano Cunego. The “Little Italian Prince” didn’t come to this Vuelta to chase a good overall place but instead to get in shape for the World Champions on a course that has never been better for him. Cunego has lost time every time the road went uphill in this Vuelta and again today he lost time in the hectic finish with the crash and the cross wind. Afterwards Cunego said that he just took it easy since he is only in the race to go for a stage win. I think he will fancy a chance tomorrow but I’m sure Felix wouldn’t agree to downgrade Cunego to a “joker”, so instead my joker pick will be Jan Bakelants.

Bakelants has shown great condition the last month and being almost seven minutes down in the overall classification Katusha shouldn’t worry too much about him taking the jersey. Bakelants has been in the mix in the other uphill finishes so far and he has shown, just before the Vuelta, that he is not afraid of attacking. If he can hit the right break he could be very dangerous on Collada de la Gallina.

You can see a video clip from Spanish TV about the final climb guided by Purito's team mate Xavier Florencio by clicking here!

Explanation: We're yet to hit the big mountains but Contador will be keen to put down a marker in Andorra after his slight uphill stutter at Jaca in stage six. The Spaniard's attacking performance in stage three is a better indicator of his form than one small climb in which he was suffering from cramps and dehydration. Contador won't make the same mistake twice and he'll want to get in on the act after wins for both Valverde and Rodriguez. There is, of course, always the possibility of a break staying out - and you can bet casa on Andalucia being involved. Gustavo Cesar Veloso is a half-decent climber and is worth an outside punt - especially if his fellow escapees are also sufficiently low on GC.

Right winner pick gives 3 points, if the joker wins it's 5 points while it's 1 points if the joker makes top3 on the stage.