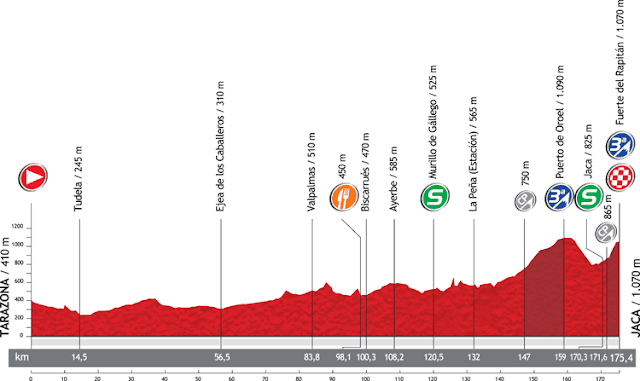 This stage has Purito written all over it. If the stage finish in Eibar was good for Purito this one is nearly perfect. The stage looks a lot like stage 5 from last year’s edition with the traditional finish in Valdepeñas de Jaén and even though the finish this time is a little longer, it still suits guys like Purito & Valverde very well.

The finish up to Fuerte del Rapitán is 2,8 km long with an average gradient of 7,5% and comes right after the Cat3 climb Puerto de Oroel, which according to former top climber Fernando Escartin isn't very difficult, but has a very fast downhill section with a lot of corners. "Therefore it's very important to be positioned in the front already on Puerto de Oroel if you want to have a chance to win the stage", Escartin points out.

It’s not only the descent from Puerto de Oroel that includes many turns also the final climb to Fuerte del Rapitán can compete on that level. No less than 13 hairpin curves in the last two kilometer with parts up to 14% wait the riders before the finish line.

Purito missed out on stage 3 and said he was pissed at himself and never would let it happen again. I think he will be extremely motivated to take his first stage win in this Vuelta and especially while he’s wearing the red leader’s jersey.

In Vuelta a Burgos he delivered Dani Moreno perfectly in the finals where Dani easily won and now it’s time to pay back the gesture. I wouldn’t be surprised if Dani even makes Top3 on this stage after setting up Purito.

Still my joker for the day is Bauke Mollema. He missed out on a good result in the Tour de France because of the big crash early in the race and he seems very eager to take revenge in the Vuelta. These kind of steep finishes are normally not really this thing but with the shape he’s showing right now I think he can surprise a few. Another thing that people tend to forget is that Mollema is actually very fast on the line and even though he can’t compete with guys like Valverde and Purito he is still a lot faster than many of the other guys.

Explanation: Nico has never won a stage on a Grand Tour and he's been riding well so far on his Saxo Bank work experience stint at the Vuelta. The Franco-Irish rider is never going to win a major mountains stage and he's not a big enough threat on GC to be denied access into a break and beyond. Could he finally come of age in the Pyrenean foothills? Probably not, but hey, there's no pressure in this competition: I have a 3-point lead and Mikkel is never going to guess the correct winner. Truth be told, Roche is just as much a wildcard as my choice for joker: the evergreen Pablo Lastras. With Valverde now out of red, the Spanish veteran is free to do his own thing, which usually translates as kicking ass in his home Tour. This could be his day - although deep down I feel that Vacansoleil may provide the winner of this unpredictable stage, a puncheur's paradise.

Right winner pick gives 3 points, if the joker wins it's 5 points while it's 1 points if the joker makes top3 on the stage.
Posted by Mikkel Condé at 9:01 PM