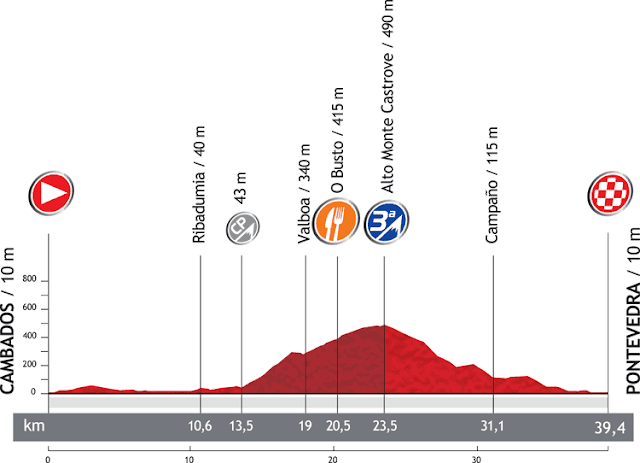 Some says the Vuelta España first starts for real on Friday, but if it hadn’t already I would say it starts on stage 11. It’s the only individual time trial in the race and I’m sure we will see some important changes in the classification when the day is over.

Knowing the current World Champion, Tony Martin, is in the race it would be natural to pick him as the favorite, but looking at the profile I’m not so sure it will be easy for the German time machine. Of the course’s 39,4 km no less than 10 is uphill followed by a tricky descent the last 16 km. That means that Tony Martin really just have the first 13,4 km to make the difference and I doubt that will be enough with the category 3 climb, Alto Monte Castrove, following right after. Its average gradient is “only” 4,4% but the beginning is very tough with percentages around 7-8 the first three km. Tony Martin tried the course on the rest day and according to Martin himself he was very disappointed of what he saw.

Therefore I think it will be a fight between Chris Froome and Alberto Contador. Froome has been outstanding in his recent time trials taking 2nd in the Tour (in front of Fabian Cancellara and only beaten by Bradley Wiggins) and 3rd at the Olympics after Wiggins and Martin. If Froome still has something left in the tank this could be his big chance of taking some time back on Contador, Valverde and especially Purito before the mountains and according to himself the course suits him despite its tricky parts.

Logic says I should pick Froome as my favorite but I think I’ll go with Alberto Contador instead. While the other riders have only tried out the time trial once or maybe twice, Contador had been riding the course 8 (!!) times before the Vuelta even started. All he has been thinking about during the ban was winning the Vuelta and remember that Contador was actually talking about taking an Olympic medal on the time trial last year before he got banned.

When Bjarne Riis signed him he said he believed he could make Contador improve his time trial skills a lot - a lot he said - and don’t forget Contador has already won time trials in the Tour de France beating Fabian Cancellara. No one is as motivated as Alberto Contador for this time trial and if it stays dry on the tricky descent I think Contador’s first win in this Vuelta will be in Pontevedra.

To be honest I can’t see any other riders than the three already mentioned wining this time trial. A guy like Andrew Talansky showed in Tour de Romandie that he can compete with the elite, when he was only beaten by Wiggins by a few milliseconds and as I have him predicted to end in the Top10 overall I also think he will do well in this time trial. Another guy I know for a fact will give a real try is Thomas De Gendt. The Giro sensation was very disappointed with his performance in the Belgian national championship against the clock and is eager to take revenge in Spain. He has already been out in breaks trying to find his legs and if everything goes perfectly he might be able to get in top3. I doubt it, but hey for a joker he could be a good pick!

Explanation: This one is hard to call. I expect it to be a three-way tussle between Alberto Contador, Chris Froome and Tony Martin - probably finishing in that order. With a climb in the middle, this is quite similar to the Tour's first time trial, in which Froome finished second. After so many exertions this summer, Froome must be knackered - and he hasn't looked half as strong as he was on the Tour. Martin would be favourite were this a flat course, but the bump puts him at a disadvantage. The worlds are more likely for the German, who by then should be back to his best. Contador is a bit of a punt but time trialling is one thing you can practice on your own - and he's had six months going solo. The Spaniard to win - by less than seven seconds, putting Froome in red. My wildcard? Andrew Talansky has been quiet so far but there must have been a reason by Jonathan Vaughters made him Garmin's leader. A former youth TT champion, the American would kick-start his Vuelta with an unexpected win.

Right winner pick gives 3 points, if the joker wins it's 5 points while it's 1 points if the joker makes top3 on the stage.
Posted by Mikkel Condé at 8:46 PM