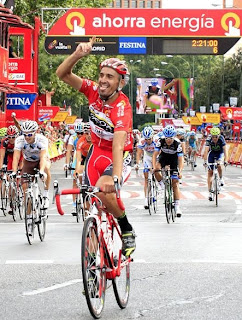 For many years I have waited for the day when Juanjo Cobo would take his first big win and yesterday it finally happened. Being one of the very underdogs before the Vuelta started, Cobo turned out to be the strongest in the mountains and his stage win on Angliru pretty much speaks for itself.

Denis Menchov lost valuable time in the first couple of days – without that he would probably have won the Vuelta – but still showed his class by helping Cobo in the last week. Even one-captain-only Carlos Sastre was up pulling the peloton for Cobo. It really was an outstanding performance by the whole GEOX team who rightfully could be celebrated as the best team during the race.

So once again; Congratulation Juanjo Cobo and congratulation Team Geox for this spectacular Vuelta!
Posted by Mikkel Condé at 11:59 AM