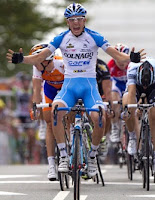 For quite some time Sacha Modolo has been on my list of potential future supersprinters. Last year he surprised many with his 4th place in Milano-San Remo, and even though this season didn't start out as great as last year, Modolo really took revenge in especially August and September. Winning Coppa Agostoni and 2 stage wins in both Post Danmark Rundt, Settimana Lombarda & Giro di Padania earned him a spot on the Italian national team for the World Champions in Copenhagen.


Sacha, great final part of the season for you! How do you feel right now about a week away from the World Champs?
I feel fine. Very relaxed. I am still young and have a lot to learn.

Italy is bringing a very strong team to Denmark, how do you see the team’s strength?
Our squad is young and hungry and we really want to do well. That it something we use. We will be escorted and protected by two outstanding riders like Paolini and Tosatto who will take care of us in the best possible way. Bennati has a lot of experience and we youngsters will have the opportunity to learn from them.

Bettini says that Italy needs to be represented in the all the breakaways and not just sit and wait for bunch sprint. What do you think will be the perfect scenario in order to bring the rainbow jersey to Italy?
Well, we are all very good for a sprint in a small group and I think that will be the ideal scenario for us. At the World Champions only the first place counts, but of course for me, with only 24 years, the podium would be a good result.

Talking about the other nations, which teams do you see as the strongest ones for the race?
First of all Spain and Australia. I’m also sure that the Belgian team will try to make the race as hard as possible while Great Britain needs to keep it all together for Mark Cavendish for a mass sprint.

And to put some names on riders who will fight for the title?
Hushovd, Freire, Gilbert, Goss and hopefully some of ours as well! Also look out for Cancellara. They don’t talk much about him, but I think he will be hiding and then be there in the end.

If you had to pick a “dark horse” for the win, who would that be?
Peter Sagan. He is young but he is monster! Good uphill and very fast in a sprint. He is a complete rider and actually much more a favorite than an outsider I would say.
Posted by Mikkel Condé at 4:14 PM