This may be the strongest field for Strade Bianche so far and therefore very hard to predict a winner. Fabian Cancellara won last year after an amazing solo effort the last 12 km and together with wonder boy Peter Sagan, he is the big favorite. The way I see it there are two likely scenarios.


Scenario 1:
Peter Sagan has one his great days and keeps staying in front when it matters. Sagan is an equilibrist on a bicycle and the white gravel roads should not give him any problems. He is among the best riders on the small steep hills and most likely the fastest rider in the race as well. He won two stages in Tour of Oman before having to withdraw with a sore throat and Thursday he showed to be back as he won GP Camaiore. Knowing how strong he is, you simply cannot rule out Peter Sagan as the big favorite for Strade Bianche. His aim is to win Milano - San Remo and/or Ronde van Vlaanderen this year and taking a win Saturday afternoon will definitely boost his morale. Sagan has Moreno Moser to help him in the finale and Moser showed last year that he can do whatever it takes to bring Sagan to victory. He showed that again in GP Camaiore when he kept the speed up in the break for last three kilometers before Sagan took over in the sprint.

In this first scenario, Peter Sagan wins Strade Bianche thanks to his technical skills and fast sprint on last few hundred meters. Probably in front of Cadel Evans and Oscar Gatto.

Scenario 2:
Fabian Cancellara shows same strength as last year and manages to get away solo. If Peter Sagan does not have any teammates in the final, is caught by bad luck or simply does not have a good day, I doubt any will be able to follow Cancellara. I think BMC will be the only team with more than one rider in the final group - both Greg van Avermaet and Cadel Evans should be there - but I doubt any of them will have what it takes to catch Cancellara. Evans will probably try to dig deep before having a go in Tirreno-Adriatico, but it might very well only be for second place no matter what.

In this second scenario, Fabian Cancellara wins Strade Bianche after a solo attack like last year. Cancellara is very strong right now and remember that a third win of the race will give him a white gravel road named after him. A win here will boost his morale for the upcoming classics and knowing the roads and how to attack them, Cancellara will be very difficult to keep down this Saturday. Like in the first scenario, Cadel Evans takes second place here, probably with Marco Marcato or Giovanni Visconti as the last rider on the podium. 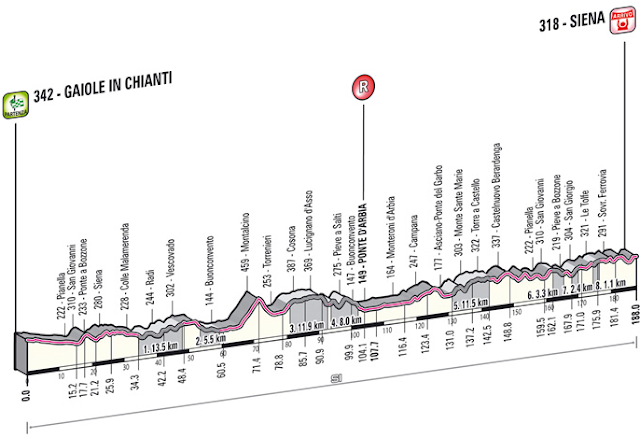 As you can see Peter Sagan and Fabian Cancellara are the two big favorites but if any of these two should strike out, I think Cadel Evans will be ready to take his chance. Evans was outstanding on the epic white gravel stage in the Giro back in 2010 and together with in-form Greg van Avermaet he should be able to do some damage.

Last year I picked Oscar Gatto as my winner pick and he turned out to be one of the strongest rider in the race taking third place after having to get back from a couple of punctures in the final. Last week I said I think Gatto will have a great spring season and this is without a doubt one of the best races for him. Gatto is great on the small hills - don’t forget how he distanced Contador and the rest of the Giro field on a steep finish two years ago - and very fast on the line too. Last year only an outstanding Fabian Cancellara was able to distance Oscar Gatto and even though it’s a stronger field this year, I think Gatto will be there in the final once again.

As always, I would like to mention a few more jokers. Riders like Francesco Reda and Marco Marcato are very strong right now and both seems to be the designated leaders of their respective teams. Reda ended 6th last year in Strade Bianche and has been having a great season so far with Gianni Savio’s Androni team. He took 3rd place overall in Tour Med, finished 2nd in Trofeo Laigueglia and 7th in GP Camaiore in the same selective group as winner Peter Sagan. Marcato has big hopes for this spring season and showed in Oman to be in great shape already. In Omloop Het Nieuwsblad he was the first rider to respond to Sep Vanmarcke’s furious attack on Molenberg and I would expect him to be among the favorites in the final on Saturday. He is good uphill and very fast on the line.

For other candidates look to fast riders who are good on the hills like Giovanni Visconti, Rinaldo Nocentini, Lars Boom and Damiano Cunego.

Not to forget: First man through the last corner wins the race.