Another sprint stage turned into a crazy cat and mouse game. Zdenek Stybar showed his class once again when he out-sprinted Philippe Gilbert. The World Champion is therefore still winless in the rainbow jersey.
The sprinters have had their chances the last three days in a row and now it’s time for the GC riders to take charge. Stage 8 is only 166.6 km long and that makes for a fast day under the hot Andalusian sun. The first 125 km of the stage will take place in head- and crosswind. The break has a good chance of making it all the way and we can expect a furious fight to get into that final break.

With about 40 km to go the riders turn left and continue alongside the coast. There is an intermediate sprint in Estepona and four kilometers later, the final climb begins. Peñas Blancas is a category 1 climb and the 14.5 km towards the top have an average gradient of 6.6 %. The first couple of kilometers are very steep with parts over 12 %. The next part is not very steep but it’s constantly up and down and it will be very difficult to keep a steady rhythm. The last 8 km, however, have a steady gradient of 7-8 % and contrary to the beginning of the stage, the riders now have a tailwind all the way to the line. The change of wind favors the opportunistic riders but in the end, it’s all about having the best legs.

Many riders are not familiar with this climb but one rider knows it like the back of his hand. I talked about Luis Angel Maté in the preview for stage 7. He didn’t make the break but it would surprise me not to see him try this Saturday. Maté rides Peñas Blancas a couple of times a week and he knows every meter towards the finishing line. You may not think of Maté as a climber but he’s been getting better and better uphill the recent years. In the Tour de France this summer he was the last rider to help teammate Dani Navarro finish in Top10 overall. On the final mountain stage to Annecy, Maté finished 27th in front of strong climbers like Antón, Ten Dam and Rolland.

In case the GC riders end up gunning for the stage win, Alejandro Valverde must be the favorite. Valverde has been eager to point out that for him the World Champions is more important than the Vuelta. However, the Movistar leader is in great shape and the steady finish suits him very well. Furthermore, Valverde is very fast on the line and should the top favorites arrive together, I can’t see anybody outsprinting him. The only thing talking against Valverde is that he doesn't know the climb. Valverde’s teammates Javi Moreno, Eros Capecchi and José Herrada could also be jokers for the stage win. Especially Herrada has been extremely strong, leading the peloton whenever the road kicks up.

Joaquim ‘Purito’ Rodriguez is already 53 seconds after Vincenzo Nibali in the overall classification. The Spanish climber knows he has to gain time whenever he can but this isn’t really a great climb for Purito. He will ‘enjoy’ the first couple of kilometers with steep gradients and constantly change of rhythm. However, the final 8 km with steady gradients won’t make it easy for Purito to drop his rivals. Instead, teammate Dani Moreno may put in another attack and take advantage of his great shape. Riders like Ivan Basso and Samuel Sanchez are normally very good on these kind of climbs and I expect to see both of them in the front as well.

The leading rider, Vincenzo Nibali, won’t have any problems on Peñas Blancas. Paolo Tiralongo, Janez Brajkovic and Jakob Fuglsang will be supporting their team leader on the climb and especially Fuglsang looks very strong right now. Nibali knows he can take time on his rivals in the individual time trial in a couple of days and he doesn’t need to attack already. Before the Vuelta started, Nibali said he was starting out on 75 % of his maximum level. So far, the Italian shark has been showing great shape but on a tough climb like this one, it may be best to ride a little cautious. Of course, if Nibali sees a chance to attack in the final and get the 10 bonus seconds, he won’t think twice.

One of my personal outsiders for the stage win is Leopold König. His countryman Stybar won stage 7 and it won’t be a big surprise if we get another Czech win on Saturday. König arrived to the Vuelta in great shape and he put in a strong attack on stage 2. Nicolas Roche ended up winning the stage but the NetApp Endura captain showed his great climbing legs. Peñas Blancas suits Leo König very well and if the favorites start looking at each other, I’m sure König will take his chance.

Other good candidates for the stage win are Domenico Pozzovivo, who’s in outstanding shape right now, Chris Horner, who is aiming to take back the Red Jersey, Bauke Mollema, who looks very strong and Sergio Henao, who is eager to take back the time he lost on stage 2. 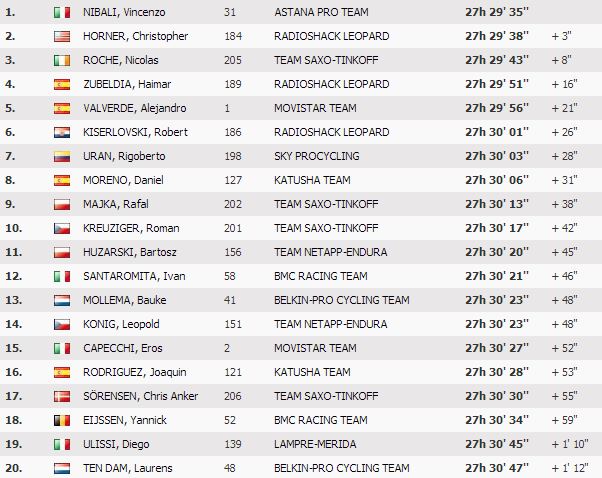