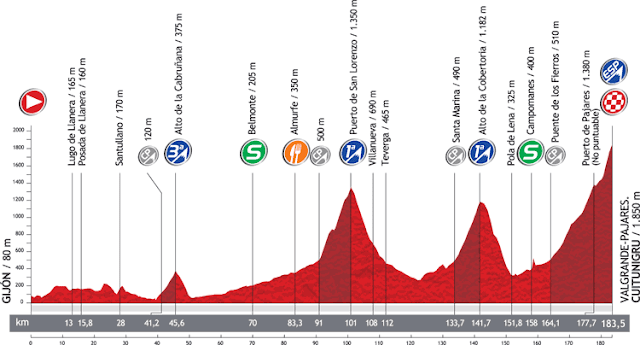 Many said the three mountain stages in Asturia would make the difference but after two it’s still a close race between Alberto Contador and race leader Purito. Now it’s time for the hardest of the three-in-a-row when the peloton climbs up all the way to Cuitunigru.

Normally Puerto de Pajares would be the finishing climb, but to spice up this Vuelta even more Unipublic decided to add another three extremely steep kilometers to Cuitunigru. As you can see on the picture the road - or what should we call it? - wasn’t really ready for pro cycling so make sure there wouldn’t be any problems new asphalt was put on earlier this year. Better road conditions or not, this is an insanely hard finish and on paper it looks perfect for Purito with a part of 25% just before the line.

Still I wouldn’t be surprised if a break makes it again. Imagine if Team Saxo Bank had worked hard to pull back the break on stage 14. Then Purito would probably have won the stage and taken even more bonus seconds. It seems like the this race will be won with very few seconds and as it is now, Contador can’t afford to let Purito take seconds for free anymore.

Everybody knows a break has a good chance of making it and therefore everybody want to be in it as well. The first categorized climb, Alto de Cabruñana, starts after 41,2 km and this is probably where the final break will be established.

Damiano Cunego has been trying very hard to get in the break the last two days but without any luck and he knows he needs to dig deep at least once to realize his shape before the World Champions. I think Cunego will do everything he can do make it this time and even though my jokers from the previous days (Quintana, Jeannesson & Tiralongo) also have a very good chance I put my faith in the Italian Prince. Meaning that with my luck in the duel against Felix, Tiralongo probably wins the stage…

Explanation:Well, well, well. I picked the wrong Caja Rural guy yesterday: even though David de la Fuente was in the break, it was his team-mate Antonio Piedra who took the win. To make things even worse, de la Fuente was pipped for third and so didn't even pick me up the one consolation bonus point that could make the difference in my duel with Mikkel come Madrid. How to drag myself up from that? Well, be bold and pick two riders Mikkel won't pick - that's how. First up, my favourite for the win is Alberto Contador, who will surely make it third time lucky after yet another attacking display. Bert is so close to distancing Rodriguez. He has to keep motivated and press on. J-Rod will certainly like the 22% ramps of the last climb of Cuitu Nigru, but he won't like the length: at 19km long and coming after two Cat.1 climbs, this will be arguably the hardest finale in this year's Vuelta. The queen stage should be won by whoever wants to be crowned king of the race. Does Contador have what it takes? As for my joker, I was at first hesitating between Damiano Cunego of Lampre and Gustavo Cesar of Andalucia. Lampre have been shamefully quiet these past two weeks and the Little Prince is surely keeping something special back for the big occasion? As for Cesar, the climber has also been rather lacklustre - and after Caja Rural's win, the pressure will be on Andalucia to deliver the goods. But in the end I went for Cayetano Sarmiento in a bold display of recklessness. Liquigas are also having a pretty shoddy race, and Sarmiento is one of the lesser-known of the swelling Colombian contingent in the pack. But he showed his climbing ability in the Dauphine and this could be his chance to sign on with the big time. If there's any justice in the world, Saddles will be rewarded for his troubles and deservedly distance Mikkel.