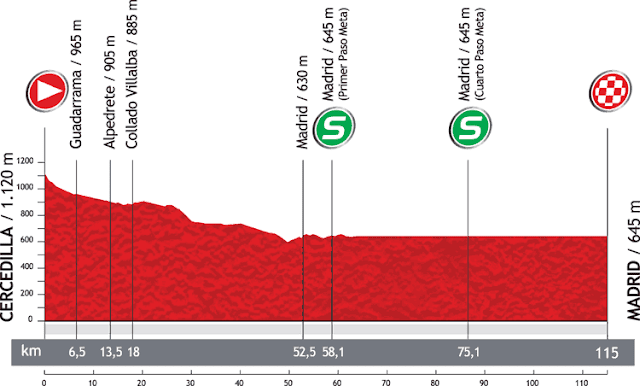 I can't be satisfied with the amounts of points I've got in my competition with Felix during this Vuelta, but at least my predictions on who's the strongest and what's going to happen seem to fit. Anyway, it's time for the last stage of Vuelta España 2012 and I can't see this end in any other way than a mass sprint on Plaza de Cibeles.

John Degenkolb has shown to be nearly unbeatable when he's up there in the finals and I'm sure Argos-Shimano want to demonstrate their strength by ending this race with a fifth stage win for the fast German. It's the classic finish in Madrid on Paseo del Prado with the finish line next to the Cibeles fountain. In total the riders do 10 laps in the center of Madrid, much like we know it from the Tour de France, and with all the jerseys settled already there isn't really anything left but the stage win to fight for. Well, maybe Alejandro Valverde will try to rip the green points jersey of Purito's shoulder, but I'm sure Purito won't let that happen like in 2010, when Mollema "stole" the jersey on the very last day in Madrid.

It should be a fight between the usual suspects Degenkolb, Swift, Bennati, Viviani, Davis etc. so again it's almost impossible to pick a joker. I have tried Manuel Cardoso, Matti Breschel & Lloyd Mondory - without luck - earlier in this Vuelta but I think I will give one of them another shot. Lloyd Mondory seems to be getting stronger and stronger during the race and he's not afraid of taking chances in the final. He's not as fast as Degenkolb and co. but if he times his sprint right, I think he can get close to a Top3 - which is the best I can hope for with a joker on this stage.