Androni Giocattoli - Venezuela managed to win the Italian Team Championship for the second year in a row and by that secure a spot in next year’s Giro d’Italia. All in all Gianni Savio’s team won 17 races this season so naturally the Italian team manager was very satisfied with how 2012 turned out.

Gianni, first of all congratulations on winning the championship.
Thank you! It was very important to us. First of all because it’s an honor to win the Italian Championship and secondly because we now have a wild card for the Giro d’Italia next year. It’s good that we can start the next season without any stress.

I take it you are quite satisfied with this season?
Indeed! I’m very, very satisfied with this year and to be honest it will be more than difficult to repeat it next year. But of course we will try. We always have the same passion and determination, but... It will not be easy to do as well as this year.

What has been the best moment for the team this year?
I would like you point out three moments. The first one is the Giro d’Italia stage we won with Miguel Angel Rubiano. It was a fantastic day and he was even virtual maglia rosa in the last kilometer. The second moment was when Franco Pellizotti won the Italian Championship. We signed him in May just before the Giro after he had come back from a very difficult time and for him to win the Italian Champions was unbelievable, not only for his career but also for himself as a person. The last one was in Giro dell'Emilia where we secured the Italian Team Championship. There was a ‘sporting war’ going on between Androni and Colnago and luckily for us Pellizotti [ending 3rd] managed to keep Pozzovivo [ending 4th] behind him. Don’t forget that if Pozzovivo had won this race, Colnago would have won the Championship!

What about the worst moment of the season?
Hmm… Maybe the beginning of Giro di Padania. Colnago won the TTT and the day after Modolo won a stage. It really didn’t look good for our team [thinking of the Italian Championship], but we managed to finish in a very strong way. We showed a lot of character and determination by putting two riders [Chiarini & Pellizotti] on the final podium behind Nibali.

Looking ahead. How do you see your team next year?
I think we still have a very competitive team. We managed to keep most of our important riders, so next year we will be able to count on Pellizotti, Sella, Felline, Chiarini and Rubiano. I think we have a good team. Furthermore I have signed some very promising young riders such as Matteo Di Serafino and Diego Rosa who is an incredible climber. I would have liked to keep both Ferrari, Serpa and De Marchi but they all got some very good offers from the ProTour teams and with our budget we simply couldn’t match that. My philosophy has always been to be able to pay everybody on the team; riders, mechanics, soigneurs etc. etc. and therefore we couldn’t afford to keep those riders.

And a quick comment about Rujano?
Well… This year Rujano did nothing. Nothing at all. He didn’t finish the Giro and generally he didn’t do well this season. Not only on a sporting level but also on a moral level.

In the past you have been the only manager able to get results from Rujano. Do you think he will succeed at Vacansoleil-DCM?
It’s impossible to say if he will manage to do well with his new team. Rujano is a very special person with a mind of his own and only - only, only, only - Rujano knows what Rujano will be able to do.

You have one the brightest talents in Fabio Felline on your team. What can we expect from him in 2013?
Felline is still very young and it’s important not to put any pressure on him. That being said, I still think he will have a very good season next year and I think he will be a protagonist in the classics and in the Giro d’Italia. There are many good stages for him in the Giro. In the U23 World Champions he was one of the favorites, but I don’t think the Italian team rode like a team. When I give directions to my riders before a race everybody knows their role, but in the U23 race the Italian team seemed confused. Felline was alone in the final and he had already spent too much energy on attacking. I think that with another strategy it could have turned out differently for him. 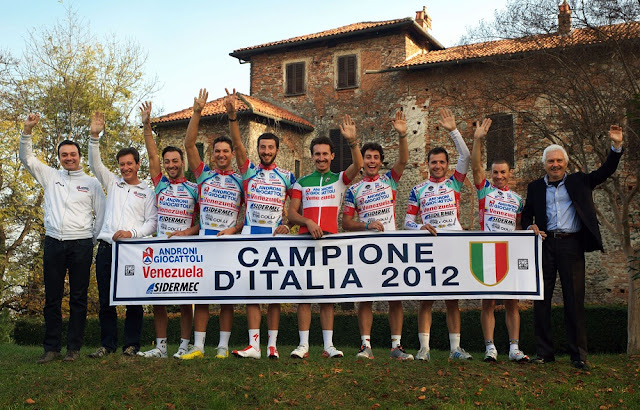 Androni Giocattoli - Venezuela just had their first team meeting of the season in Rivarolo Canavese where they were presented with the prize of winning the Italian Team Championship. The team will get together again in the middle of December [9-16] before starting the new season in Argentina with Tour de San Luis.

Even though 2012 has been a huge success for the team, Gianni Savio hasn’t given up on the idea of joining the world’s elite and upgrade to the UCI WorldTour. You can read all about this by clicking here.
Posted by Mikkel Condé at 4:11 PM