A few outsiders to win Lombardia

Let’s face it; there is one name and one name only when you talk about favorites for the hilly classics these years. Philippe Gilbert. Thing is that every rider in the peloton already knows that and it wouldn’t surprise me if we got an outsider on top of the podium in Lombardia to close a spectacular season.

Let’s take a look at a few outsiders who could ruin ‘the perfect’ season for Gilbert. 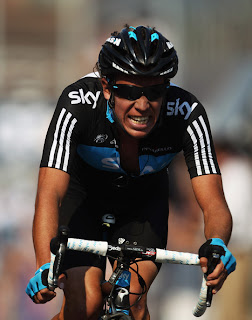 Rigoberto Uran, Team Sky.
Rigoberto Uran was very close to his big breakthrough in the Tour when he seemed sure to win the White Jersey before going under on the stage to Alpe d’huez. After that he regained his energy with a strong performance in San Sebastian before taking third place in GP de Quebec and latest another third place in Giro dell’Emilia. After Emilia he saved his energy for Lombardia where he will be the sole captain for a very strong Team Sky with Thomas Löfkvist showing great shape.

Uran is strong on the small steep climbs and very fast in a sprint, so don’t be surprised if he takes another top3 spot on Saturday - if not the win…

Pablo Lastras, Movistar.
It’s been a long and very successful season for Pablo Lastras and even though he had a long journey from the heavy smog in Beijing he should still be able to put down a good fight in Lombardia. It’s one of Lastras’ favorite races and last year he took third place after Gilbert & Scarponi showing great motivation for a good result despite the victory being out of reach for him. To help Lastras in the best possible way, Movistar sends strong riders like Rui Costa (who could be an outsider himself), Beñat Intxausti, Angel Madrazo, Ruben Plaza etc.

As said Pablo Lastras has had an amazing season so far and I think - and hope - that he can end it with style in Lombardia. 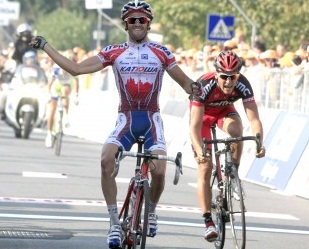 Daniel Moreno, Katusha.
I know. This is maybe too easy after he won in Piemonte last Thursday, but Dani Moreno is in fact a pretty good pick for an outsider to win Lombardia this year. Like Lastras, Moreno is finally back at this former level, probably even a lot better than ever before, and with Purito and Paolini the Katusha team really have a strong trio. Purito will probably be the leader, but like in Piemonte, Moreno can take advantage of this and try his own luck.

Most of you know that Dani Moreno is one of my favorite riders in the peloton, but no matter what, you all have to agree that if you can win in Piemonte two days before, you can definitely do great things in Lombardia as well!

Prezemyslav Niemiec, Lampre.
Damiano Cunego is without any doubts the leader at Lampre for Lombardia, having practically owned it earlier, but look out for this Polish guy as well. Niemiec is well known for his climber skills and after spending the whole season working his ass for his leaders, especially Michele Scarponi, this could be his big chance for a result for himself. Ending 5th in Emilia and 6th in Piemonte, Niemiec is certainly on the top of his game right now and if the long journey from Beijing shows to be too much for Cunego, he could end up surprising a lot of people with a strong ride in Lombardia!

If you are a gambler and you want to find the best winner bets for Lombardia, I suggest you read my article "Follow the money" at this site.
Posted by Mikkel Condé at 12:51 PM