The final day of the Dauphiné is still a big mountain stage but relatively easier than the previous stage. It’s shorter, there are few climbs and vertical metres plus the final climb is a regular affair. But it’s still a race and a prestigious mountain stage victory is up for grabs. 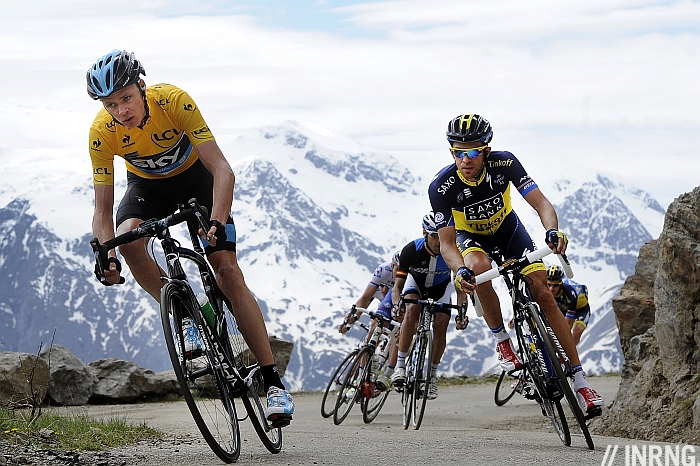 Stage 7 Wrap: a big break went before Alpe d’Huez. The start was fast and many riders abandoned including NetApp-Endura’s Leopold König who was sitting in ninth overall. The Alpe was climbed and the Sarenne descended without any incident.
But the move was too big and allowed several riders to sit on, for example Angel Madrazo of Movistar. A headwind proved fatal and all riders were eventually swept up. We saw several role reversals, first Alberto Contador played team mate, setting the pace on the Col du Noyer for an Aussie swap, ejecting Rohan Dennis and putting Michael Rogers on the podium although the Garmin-Sharp rider keeps his white jersey. Next was Samuel Sanchez who stole the acting crown from Thomas Voeckler with his grimacing and teeth-baring only to outsprint Jacob Fuglsang for the win but theatrics aside it was a clear win and his first of the year.
Froome was out of the saddle a lot on the final climb which is unusual. Normally he climbs with his elbows bent as if pushing a supermarket trolley and head tilted to the side like he’s wedging a phone on his shoulder but he was even more asymmetric than usual. It’s too much to say he had a bad day, he never lost a metre but perhaps he a “tell” that signals fatigue.
The Route: 155km and 3,700 vertical metres, with most of the climbing concentrated at the end. A scenic start in Sisteron with its fort sitting above the Durance river but it’s not strategic for the race. The race heads north-east into the Alps, slowly rising on roads that drag on at 2-3% for a long time, often reaching 5%. It’s tiring for those setting the pace but fine for those sheltered on the right wheel. 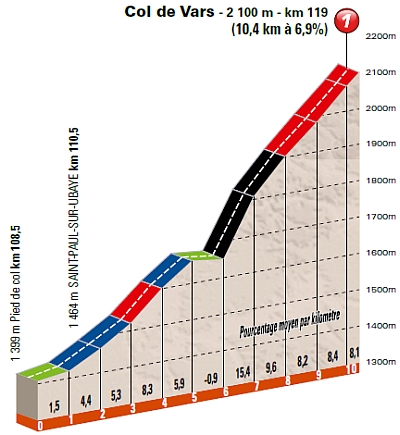 The Col de Vars starts with about 45km to go. As the profile shows it is very irregular, an easy start followed by a brief descent before a 15% section and then over 8% to the top. But a word of caution, the 15% label seems excessive.

The Finish: regulière as they say in French. This is a steady climb where riders can get into a rhythm and hardly need to change gears once the slope starts to bite. But regular is not easy, 13.9km means a long climb and it’s steep enough to do plenty of damage. Again the profile shows a section of 9% but it’s not that bad, instead the slope eases to the finish line in the ski resort.
The Scenario: the last chance. A breakaway could go but the likes of Movistar and Katusha seem keen to set up a win for Alejandro Valverde and Joaquim Rodriguez. But their attacks on the Col du Noyer seemed the wrong idea, both can sprint fast at the top of a mountain and you wonder if they’d be better off letting Team Sky do the work and then taking on the likes of Richie Porte in the final 300 metres for the stage win? Samuel Sanchez had to work for his win but could repeat the feat, he’s got better during this race.
The long final climb is idea for the bunch to reel in any moves, whether the early break or a late move. The big wide roads allow a team to pace their effort.
TV: the stage finishes early at 2.45pm. cyclingfans.com and steephill.tv have the links to video streams if you can’t get it on TV.
Weather: often run in a heatwave, this year’s edition has had cool conditions and the final stage could see sunshine and showers with cooler temperatures of 12-16°C. A light tailwind from the south-east will help speed the bunch on its way.
Déjà vu: Risoul is not the most famous name in the Alps but it’s trying to make a name for itself with cycling. It’s hosted the finish of the Tour de l’Avenir (Nairo Quintana won the race thanks to the climb) as well as a stage of the Dauphiné in 2010 when Nicolas Vogondy (Bbox Bouygues Telecom) rode away for the win, profiting from marking amongst the big names to land the win. And if the climb is becoming familiar, the Risoul summit finish will be on the route of the Tour de France in 2014.
Top 20 Overall1 Christopher Froome (GBr) Sky Procycling 25:00:132 Richie Porte (Aus) Sky Procycling 0:00:513 Michael Rogers (Aus) Team Saxo-Tinkoff 0:01:374 Daniel Moreno (Spa) Katusha 0:01:475 Daniel Navarro (Spa) Cofidis, Solutions Credits 0:01:496 Jakob Fuglsang (Den) Astana Pro Team 0:02:047 Stef Clement (Ned) Blanco Pro Cycling Team 0:02:328 Alejandro Valverde (Spa) Movistar Team 0:02:479 Rohan Dennis (Aus) Garmin-Sharp 0:02:4810 Alberto Contador (Spa) Team Saxo-Tinkoff 0:02:5611 Rein Taaramae (Est) Cofidis, Solutions Credits 0:03:2112 Samuel Sanchez Gonzalez (Spa) Euskaltel-Euskadi 0:03:4513 Laurens Ten Dam (Ned) Blanco Pro Cycling Team 0:03:4914 Michal Kwiatkowski (Pol) Omega Pharma-Quick Step15 Alexandre Geniez (Fra) FDJ 0:05:1016 Haimar Zubeldia (Spa) RadioShack Leopard 0:05:4017 Thomas Voeckler (Fra) Team Europcar 0:06:5518 Geraint Thomas (GBr) Sky Procycling 0:07:3119 Joaquim Rodriguez Oliver (Spa) Katusha 0:08:3920 Warren Barguil (Fra) Team Argos-Shimano 0:08:40
Posted by Mikkel Condé at 8:12 PM