Unfortunately, Fabian Cancellara saw the need to spin the legs in Scheldeprijs on Wednesday. He crashed in the race and so did he again the next day, while checking out the cobblesstone sections for Sunday. Two crashes in two days and suddenly Cancellara is not the massive favorite he was as after winning Ronde van Vlaanderen. He is still the favorite, but strong riders like Thor Hushovd, Taylor Phinney, Juan-Antonio Flecha, Ian Stannard, Edvald Boasson Hagen etc. are now more likely to win than they were just a few days ago.

I would imagine Radioshack to take control like they did last Sunday but they have to be careful. BMC and Team Sky have two very strong teams with multiple winner candidates and Radioshack can’t close all gaps by themselves. In the end it will be up to Fabian Cancellara himself to take action and if he still feels the recent crashes, he won’t be as unbeatable has he looked in Ronde van Vlaanderen. I still think Cancellara will win Paris-Roubaix, but I wouldn’t be surprised if a BMC or Team Sky rider crosses the line first on the velodrome.

I have a feeling Taylor Phinney will end on the podium. Last year, all he was thinking about was the Giro d’Italia prologue and he absolutely killed it. This winter has been all about peaking in Paris-Roubaix for Taylor Phinney and even though it won’t be as “easy” as winning the Giro prologue, the young American knows how to perform under his own pressure. Phinney has been naming Thor Hushovd as BMC’s designated team leader numerous times the last couple of weeks, but I personally think, Phinney will end as best BMC rider on Sunday. He’s incredibly strong on the cobblestones and very fast on the line. If Taylor Phinney arrives to the velodrome in the first group, I think he will win this race. 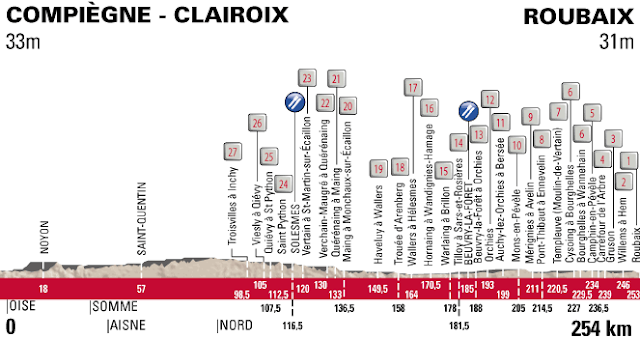 Paris-Roubaix is also the last chance for Team Sky to prove their untraditional Classics training was a good idea. It’s easy to criticize them, but we must remember that Geraint Thomas crashes in both Milano-San Remo and Ronde van Vlaanderen. In Milano-San Remo, Ian Stannard took over and did a great race and last Sunday, Edvald Boasson Hagen almost got on Sagan’s wheel when he and Cancellara went away in the final. EBH couldn’t stay with the strong duo on Kwaremont, but I think he will be better on the cobblestones. Like Phinney, Boasson Hagen is very fast on the line and I expect him to be among the best riders on Sunday.

Like always, I’ll like to point out a joker. This time it’s Matthieu Ladagnous. The big Frenchman has been very strong so far this season and the last couple of week he’s been near the front at all time. He was in the winning break with Sagan in Gent-Wevelgem (ended 6th) and he took 2nd place in the sprint behind the podium in Ronde van Vlaanderen last Sunday. Ladagnous finished 12th in Paris-Roubaix last year and he is very eager to do even better this year. He probably won’t win this race, but I wouldn’t be surprised if he’s among the riders fighting for a spot on the podium.

For live coverage of this year's Paris-Roubaix go to steephill.tv
Posted by Mikkel Condé at 11:05 PM