Yesterday the route for the next year’s Tour de France was revealed and at first glance it seems to be a very interesting race. Bradley Wiggins was quick to say he won’t be trying to defend his title from this year and that means we should be in for quite a show when Chris Froome takes on Alberto Contador.

The stages
All the stage profiles are yet to be released but here is my first preview of the Tour de France 2013:

The Tour starts on the French island Corsica and along the seaside this could turn into a very tricky first stage if it’s windy. Since 1967 the Tour has only started with a regular stage twice (in 2008 & 2011) and both times with an uphill finish. This time it seems to end in a sprint - despite the little bump on the profile in the end. Mark Cavendish has worn a lot of different leader’s jerseys in his time, but not the yellow jersey in Tour. The Cannonball will be difficult to beat in Bastia. 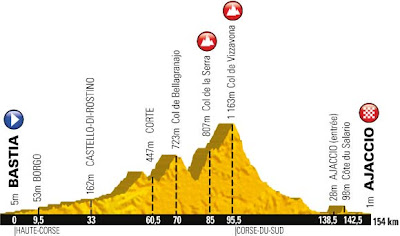 If Cavendish manages to get the jersey on stage 1 he most likely will have to give up already. This stage is up and down all day long and even though there is a long descent after Col de la Serra (5,2 km / 6,9%) and Col de Vizzavona (4,6 km / 6,5%), Côte du Salario should be too tough for the sprinters. Placed only 11 km from the line and with an average gradient of 7,2% over 2,5 km, Côte du Salario is a good place for puncheurs like Philippe Gilbert to attack and reduce the group. Peter Sagan could very well take over the yellow jersey if he doesn’t already wear it after stage 1.

This is the last stage on Corsica and once again we have quite some hills on the menu. Why only two of them have been categorized only ASO know, but nevertheless it will be another tough day on the island. It’s another short stage - only 145 km - and with a climb right in the beginning it will set for a fast and hard day in the hills. A break will probably get away within the first 50 kilometers but I doubt they will ever get a big gap. The last climb, Col de Marsolino is very hard (8,1% over 3,3 km) and with only 12 km to the line from the top all the GC contenders need to be in the very front in order not to lose any time. Samuel Sanchez crashed out of the Tour in 2012 and if he’s ready this time he could be a good pick thanks to his excellent downhill skills and fast finish in a reduced group.

On Day 4 the it’s time for first time trial in the Tour. A short team time trial around Nice. It’s only 25 km and that means we won’t see big differences already. Team Sky will most likely be able to gain some times on their rivals but don’t expect time gaps of more than 1 minutes between the big favorites.

We don’t have much info on the following three stages but according to ASO at least two of them should be tailor-made for the sprinters. After this it’s time for the first big mountains as the peloton reaches the Pyrenees. 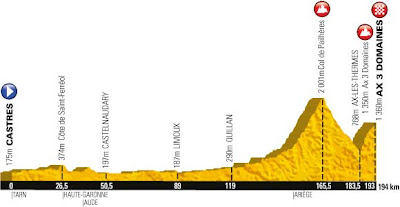 Thanks to the hilly stages on Corsica and the team time trial in Nice we should already have an idea about who’s ready to fight for the overall win. Still a lot can be changed on this stage. It’s the first big mountain stage and with 140 km flat terrain before the final a lot of riders will be anxious to see how their legs will respond to the 15,3 km Col de Pailhères (8% avg.) climb before the final ascent up Ax 3 Domaines (7,8 km / 8,2 %). I would expect Team Sky to carry the yellow jersey after the TTT and knowing how much work is it, I wouldn’t be surprised if they let a break get a good gap early on. Riders aiming at the polka dot jersey, and riders already set back in the GC, will be eager to get away while the favorites are saving thee energy for later. 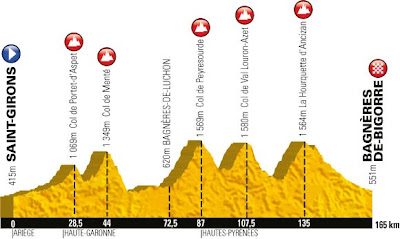 In case you missed the break away the day before, this is really a stage you need to get up front if you aim at the polka dot jersey. With no less than five categorized climbs on the menu and a long descent to the finish line this stage has Thomas Voeckler and Luis Leon Sanchez written all over it. Both are great on the climbs and excellent on the downhill sections and if none of them are any threat in the GC they won’t have any troubles staying clear. I would imagine Voeckler taking the KOM points and Sanchez the stage.

After the rest day it seems to be another day for the sprinters before the GC guys once again have to be ready. Stage 11 is the first individual time trial in the race and despite it only being 33 km, specialists like Wiggins and Froome should be able to distance climbers like Andy Schleck, Purito Rodriguez and Pierre Rolland with a couple of minutes. The following two stages are made for the sprinters while stage 14 presents an opportunity for the puncheurs as the sprinters will have troubles getting over the short, steep climbs in Lyon.

Ever since the rumors about Mont Ventoux returning to the Tour started, I’ve been looking forward to this stage. For me Mont Ventoux is one the ‘best’ climbs in the Tour and this time I hope the favorites finally will fight for the win again. It’s a long stage and with Ventoux as the only climb a break has a good chance of getting a huge gap before the final ascent. It’s the 14th of July, Bastille Day, and that means we will see a lot of French riders trying to get away. Young gun Thibaut Pinot showed in 2012 that he is a man for the future and if he can improve even more during 2013, he could give France a brilliant stage win on the national holiday.

First stage after the last rest day seems to be one for a breakaway to make it as the favorites will hope to save energy for the time trial the following day. Once again the distance is only 33 km, but compared to the first ITT, this one is much more mountainous. The pure climbers won’t lose as much time as before and with the Alps coming up next they will be eager to hang on to their position in the GC. 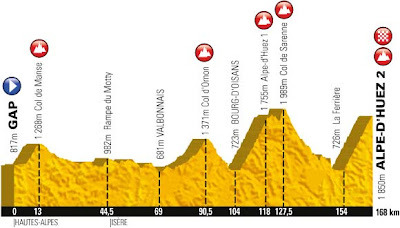 This is without a doubt the Queen Stage of the Tour de France 2013. Alpe d’Huez is on the menu, not just once but TWICE! It’s a stage where the polka dot hunters will have to attack early but I doubt they will make it all the way to the line. Pierre Rolland won the last time on Alpe d’Huez, but this time I think it will be one of the big riders taking the win. Alberto Contador got denied the win in 2011 when he was caught a few hundred meters from the line and I think he will take revenge a get his win on this mythical climb. 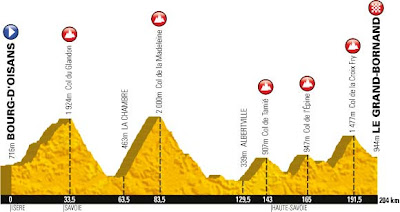 This is where the polka dot jersey will be won. Once again we have five categorized climbs on the menu and once again it’s a good stage for riders like Thomas Voeckler and Luis Leon Sanchez. Some of the pre-favorites losing out in the GC could have a go on this stage but if Thomas Voeckler hasn’t won a stage yet I think this will be where he will do so. 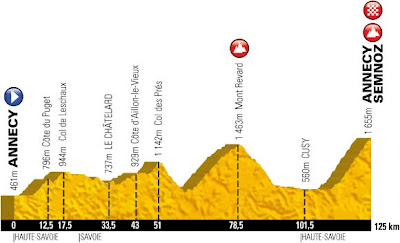 Last time to shake up the GC before entering Paris. It’s another short stage, only 125 km, but with two tough climbs it won’t be easy. Mont Revard should make a selection with its 16 km but not as much as the final climb up to Annecy-Semnoz (10,7 km /  8,5%). Unless the leading rider has over two minutes to his nearest rivals everything can still happen and I expect the leaders to fight for the stage win. I think Alberto Contador will be leading the race by this time and therefore only  having his eyee on number two (and three) in the GC. That means that a pure climber like Nairo Quintana will have a change of getting a stage win as he probably won’t be a threat overall.

The last stage ends as always on Champs-Élysées but this time in the evening with an expected finish time around 21:00! It will make for a spectacular finish and with a full team supporting him I think Mark Cavendish will give his new Quickstep team something to cheer for in Paris and finish the Tour the way he started it - with a win!

All in all this seems to be a great route for the fans with a good mix of mountains and time trial kilometers.

Overall Classification
It’s still very early but this is how I think the final podium will be: